Celebrity makeup artist Patrick Ta has revealed the beauty tricks he uses to paint the face of his biggest celebrity client, Bella Hadid, recently named the ‘world’s most beautiful woman’.

In a YouTube tutorial with Australian influencer Chloe Morello, Patrick, 27, said applying contour before foundation is the key to creating natural depth across the face, while using blush across the eye socket creates continuity between eye and face makeup.

Patrick, who is based in Los Angeles, sculpts effortless eyebrows by filling and brushing them upside down, but admitted he shies away from plucking clients’ eyebrows because the shape and style is so personal to women. 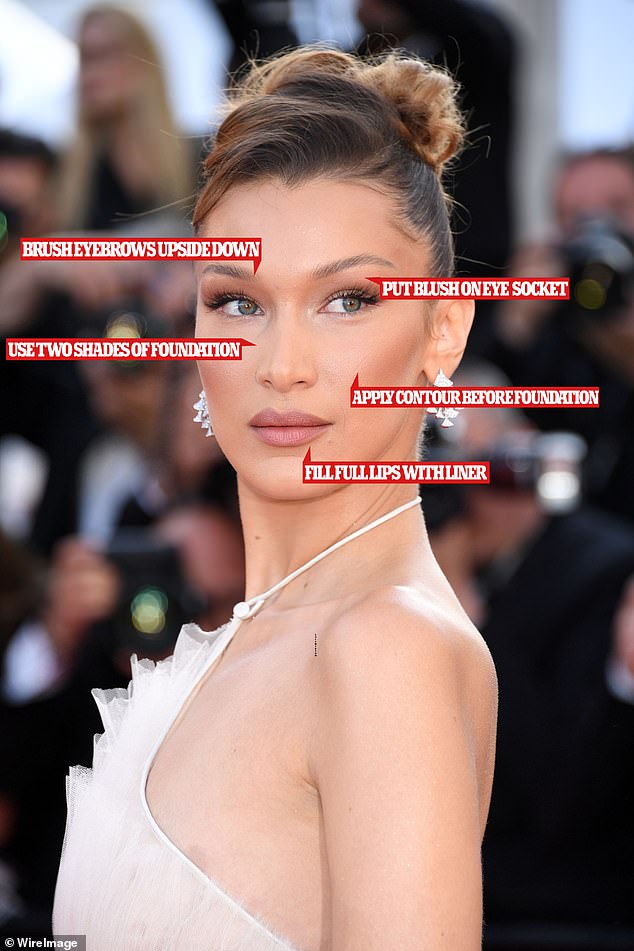 Celebrity makeup artist Patrick Ta has revealed the beauty tricks he uses to paint the face of his biggest celebrity client, Bella Hadid , recently named the ‘world’s most beautiful woman’

HOW TO BUILD THE PERFECT BASE

It’s well known that prepping skin with moisturiser and primer makes foundation last longer, but Patrick has a particular knack for building a long-lasting base.

Patrick always uses both oil and cream primer, which he believes is the key to seamless foundation.

If the client has oily skin, he uses a cream primer across the T-zone – the part of the face made up of the forehead, nose, chin and area directly around the mouth – which is particularly prone to oiliness because of the high concentration of oil glands.

Unusually, Patrick applies contour before foundation, which goes against the general process followed by makeup artists.

‘I feel like it helps the blending – I hate when there’s too many colours on the face at once, between contour, concealer and foundation,’ he said.

He dabs dark contour along the cheekbones and anywhere he wants to create depth before gently blending it into the skin.

To elongate features and make them appear more slender, Patrick draws light lines of concealer and buffs them into the skin. 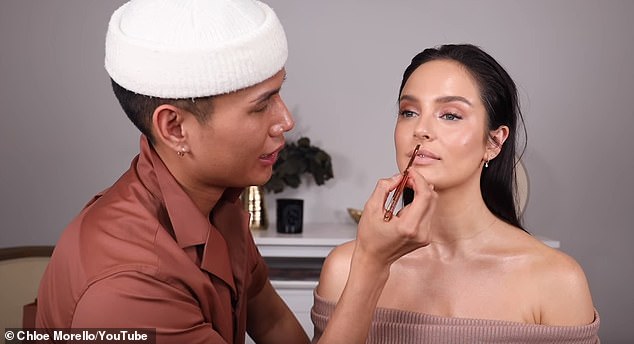 HOW TO CREATE CONTINUITY BETWEEN FACE AND EYE MAKEUP

To create perfectly monochrome makeup – the technique of keeping your eyes, lips and cheeks the same colour – Patrick uses blush in an unexpected area.

He applies the product across the eye socket, as well as to the cheeks and the top of the forehead, to create continuity between face and eye makeup.

To achieve a natural looking, flawless foundation, Patrick blends two shades together on the back of the hand before applying to the client’s face.

This adds depth and tone to the makeup base, mimicking natural colour differences in the skin.

He dabs a light coat across the eye socket to create a ‘seamless blend’ of foundation across the face, dabbing whatever is left on the brush across the neck and collar bones to achieve the same shade on the face and body.

To achieve natural bronzed look, Patrick gently pats a light layer of bronzer over foundation, being careful not to blend too heavily to disturb the foundation.

His favourite bronzers and blushes have pink undertones, which create the appearance of naturally sun-kissed skin. 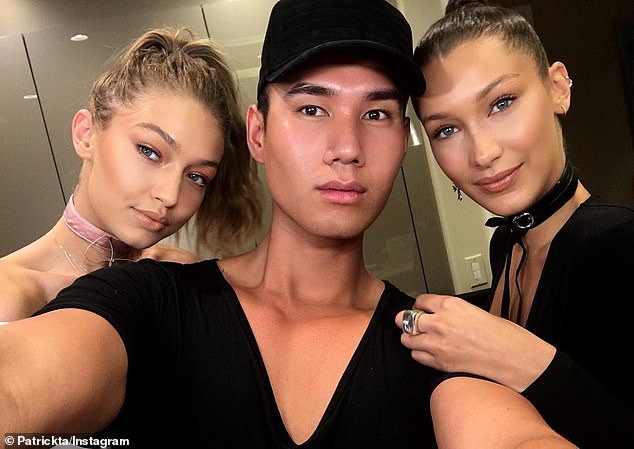 To achieve a natural looking, flawless foundation, Patrick blends two shades together on the back of the hand before applying to the client’s face (pictured with Gigi, left, and Bella Hadid, right in 2016)

HOW TO ACHIEVE NATURAL LOOKING EYEBROWS

In the early days of his career, Patrick started every look with eyebrows, but now prefers to leave grooming and filling until last, which he believes is the trick to achieving the most natural and effortless look.

Living up to his name as the go-to artist for the rich and famous, Patrick sets himself apart from other makeup pros by filling and brushing eyebrows upside down, standing behind the client and reaching over their head.

Patrick admitted he is always reluctant to touch eyebrows with a tweezers.

‘Whenever my clients have bushy eyebrows and I want to pluck something, I’m always so afraid because people are so sensitive about their eyebrows!’ he said. 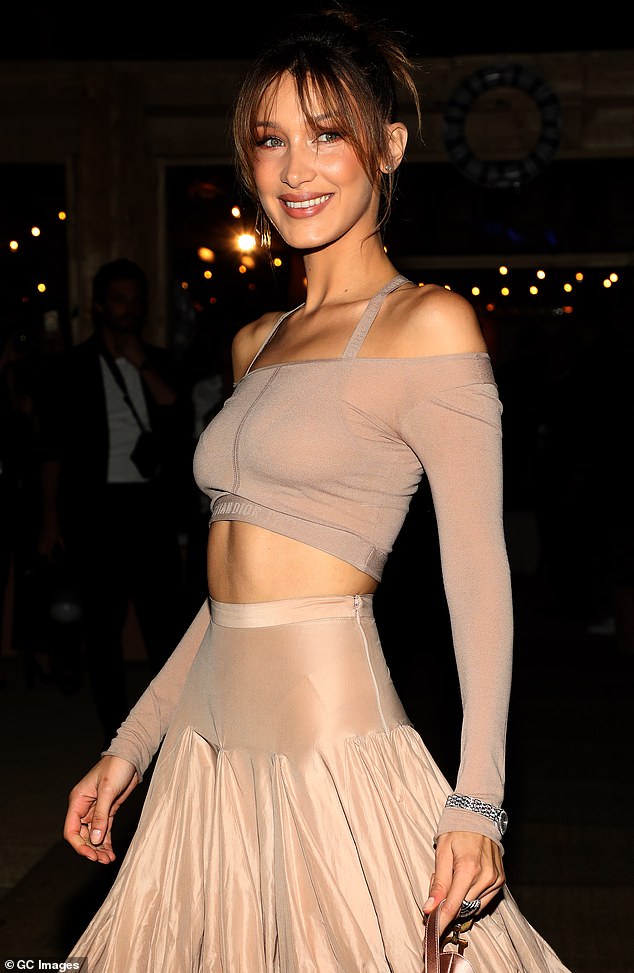 At the start of his career, Patrick started every look with eyebrows, but now prefers to leave them until last, which he believes is the trick to achieving the most natural and effortless look (pictured, Bella steps out in makeup by Patrick Ta in Cannes, France in May 2019)

HOW TO SEAMLESSLY BLEND EYESHADOW

Before starting on eyeshadow, Patrick sticks two ‘shadow shields’ underneath the eyes to catch fallout from the product, which are gently peeled off once eye makeup has settled.

Patrick uses two brushes, one to apply the shadow and the other to blend it into the crease and under the brow line.

HOW TO PAINT THE PERFECT POUT

Patrick likes to fill the full lips with lip liner to ensure a natural finish and help keep the shape of the lips consistent.

Once filled, he paints over the liner with a cream-based lipstick, starting with the bottom lip before asking the client to gently purse their lips together.

For a glamorous evening look, he adds a slick of gloss around the outer rim of the lips to enhance the plumpness of the pout.