One of the most difficult jobs might be finding a new take on the infamous Joker makeup when depicting it for the big screen given the character’s popularity among fans.

But makeup artist Nicki Ledermann, an Emmy award-winning makeup artist previously known for her work on Sex and the City and The Greatest Showman, was up for the challenge when transforming Joaquin Phoenix into the character for Joker.

In an interview with Elle, Ledermann explained her process for developing the makeup look and what aspects of past character portrayals came into consideration when she was finalizing the latest iteration. 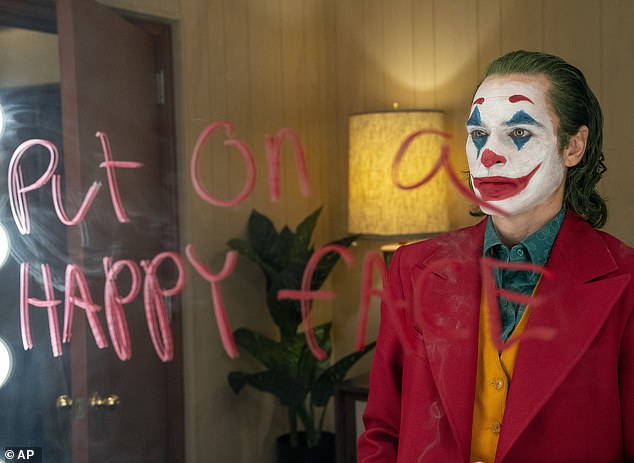 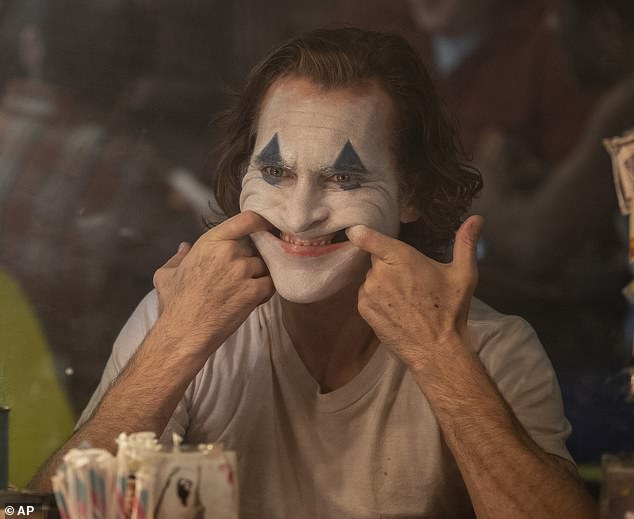 Final look: She first researched clown makeup and past looks for the iconic character to then settle on a design similar to that of a clown

Ledermann said she first researched clown makeup when deciding the design, but it offered its own unique challenges.

‘Pretty much every clown makeup is copy written, so you have to come up with something new, maybe borrowed but not identical, like in music or any other creative field, an inspiration, a reminiscent vibe, a color theme, made into something new,’ she told the publication. 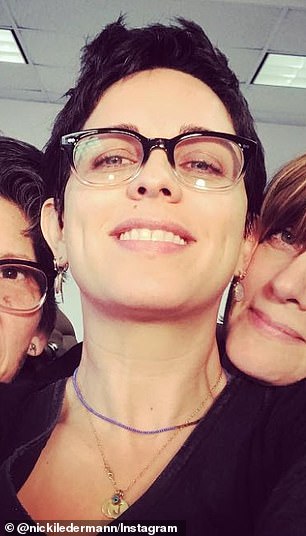 Inspiration: ‘Joaquin’s version is a clown makeup that is realist and organic in terms of the application,’ Ledermann (center) said

Collaboration then happened between both Phoenix and Joker director Todd Phillips to create a makeup look everyone wanted.

‘Collaborating was the key: hair, costume design, production design and cinematography, we all worked closely together to “paint” the overall picture of the movie, always referencing each other in mood, texture and color palette for synchronicity,’ she said.

But Ledermann also credited Phoenix for his ability to bring ‘the makeup to life’ with his ‘incredible performance’ of the Joker, ‘because it has to come from within to make it so powerful.’

The final version of the makeup showed Joaquin slathered in white face paint to cover the entirety of his face, and it also covered up his eyebrows.

Then a red mouth was painted to extend out into a smile towards the cheek bones.

Additionally, blue diamonds were painted across his eyes and lids with red eyebrows drawn high up on the actor’s forehead.

It was important for the purpose of the film for the makeup Joaquin wore to be very clown-like and have the ability to be applied by him onscreen. 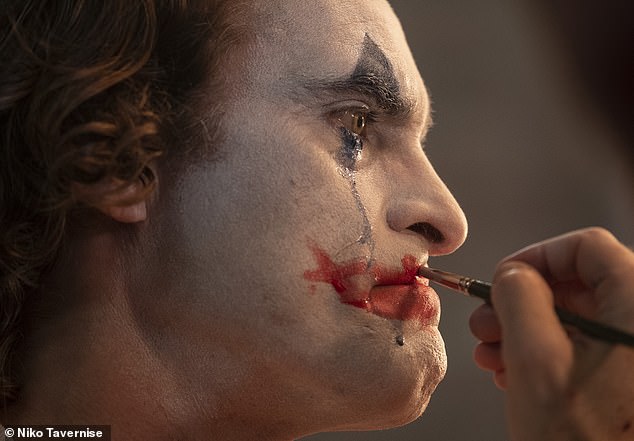 Important: Another priority when creating the makeup look was that it needed to be simple enough for Joaquin to recreate onscreen 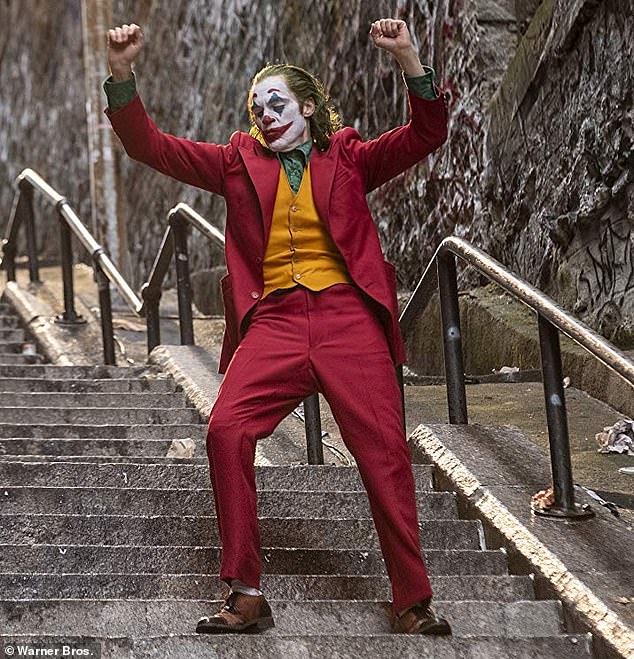 Lending a hand: ‘I showed him the best way to do it, gave him the tools and makeup to use in the scene and he just perfected it,’ Ledermann said

‘Joaquin’s version is a clown makeup that is realist and organic in terms of the application,’ Ledermann said, adding: ‘He works as a clown to support himself and his mother, he puts the makeup on himself, he is not really that skilled.

‘It was important to show that in the movie to keep it authentic and real.’

Ledermann and her team would only keep Joaquin in the makeup chair for about 20 minutes when applying his look because he ‘couldn’t sit for long’.

Also, she had to train the actor on how to apply the makeup for the camera during very intense scenes, one of which has since become a viral meme.

‘It was important that he could do it in the moment and there was really no wrong way to do it, as the whole point of the design was that it was spontaneous and not super-skilled,’ she said. 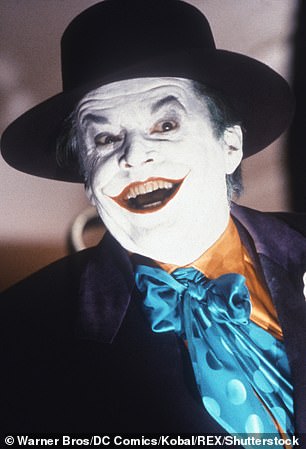 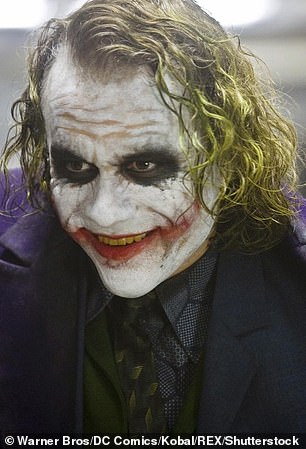 Past characters: Ledermann took time to research past character makeup, including when Jack Nicholson (left) and Heath Ledger (right) played the Joker 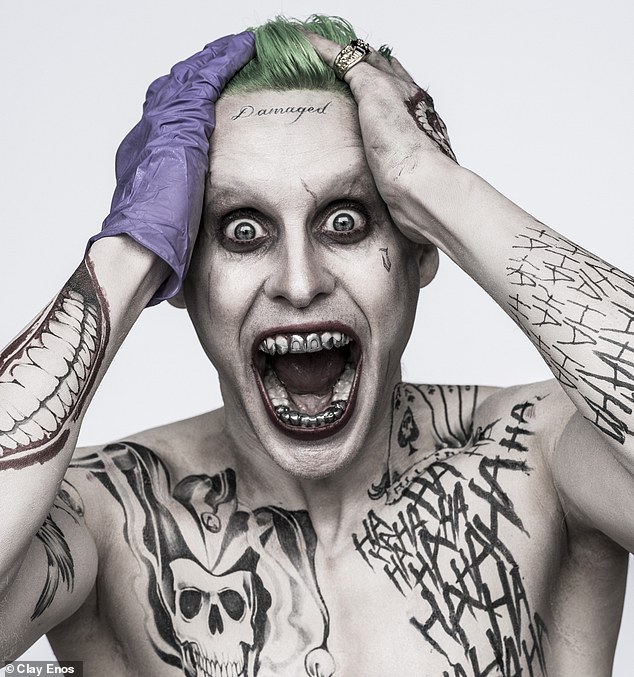 Something different: Jared Leto’s Joker look was vastly different to previous portrayals, and featured far fewer of the clown-inspired elements

‘I showed him the best way to do it, gave him the tools and makeup to use in the scene and he just perfected it.’

The biggest challenge Ledermann ran into was making sure the makeup fit with each scene when filmed because they were all shot out of order.

So she and her team had to make sure continuity of the makeup made sense once the movie was edited together.

‘It was imperative being able to manipulate the makeup so I could take it off and redo it fast after every take matching it perfectly to the prior take, or having to have it smear during the take, then fix it in between, or having to make it appear to smear but actually have it stay put without smudging during the take,’ Ledermann said.

Final results of the makeup for Joker created a look different from that of past villains, earning its own mark in the character’s history on the big screen.