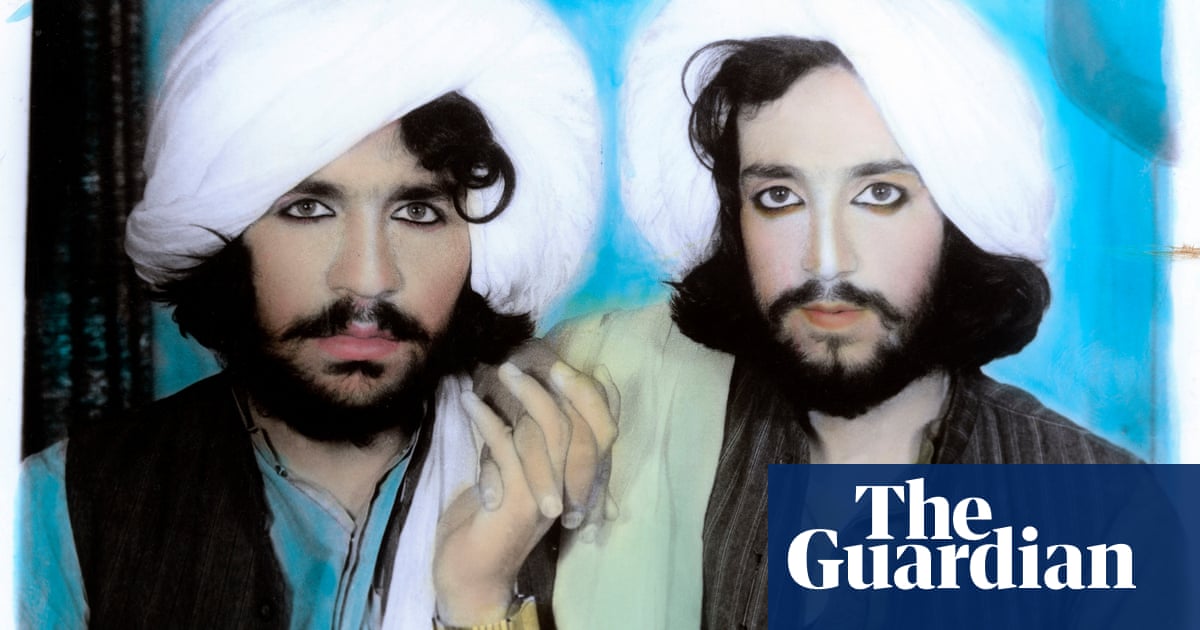 They are probably the least likely men to ever be willingly pictured in heavy makeup, painted nails and holding plastic flowers against a kitsch background of Swiss Alpine chalets.

But pictured they were, all gun-toting Taliban fighters often holding hands and posing for photographs which will be shown next year, the Barbican has announced.

The photographs were found in Kandahar, Afghanistan, in 2002 by the Magnum photographer Thomas Dworzak.

They are “visually arresting,” said Barbican curator Alona Pardo, and remarkable because they are real. “These are not constructed photographs, these men have chosen to have the photographs made and present themselves to camera like that. It just shows you the agency of images to destabilise our perceptions.”

Photography was banned by the Taliban but a handful of photo studios were allowed to remain open, not least because passport photographs were still needed.

Dworzak was in Kandahar for the New Yorker a few weeks after remaining Taliban fighters had been chased away. He came across the photographs in the backroom of a studio and offered to buy them.

“They were more than happy. They said ‘look they’re not going to come back to pick them up.’”

He said the photographs could be seen as an extreme form of hypocrisy. But he also found them “incredibly touching”.

“I’m almost envious of the photographer that they could take these portraits of these guys … the Taliban then were the absolute personification of evil and you have them holding hands with plastic flowers. It is very confusing but I like that.”

Dworzak published a book of the pictures and was criticised by some for making fun of the men; by others of showing them in too positive a light.

“I never expected that reaction. A lot of people also thought I took the pictures.

“What is important I think is that this is not a Taliban-specific aesthetic. It is something you can find in the sub-continent, in India and Pakistan. The extra twist is the Taliban banned photography.”

The photographs will be included in a major group show titled Masculinities: Liberation Through Photography featuring work by 50 artists including Annette Messager, Richard Avedon, Isaac Julien and Catherine Opie.

It is part of a wider year-long season at the Barbican called Inside Out, exploring the relationship between people’s inner lives and creativity.

Theatrical highlights will include two shows directed by Ivo van Hove – an adaptation of Thomas Mann’s Death in Venice and Tennessee Williams’ The Glass Menagerie starring Isabelle Huppert as Amanda; and a new production from Belarus Free Theatre which is being staged 10 years since it was put in political exile.

• Masculinities: Liberation through Photography is at the Barbican art gallery 20 February-17 May.