In honor of Romero Lives!, the city’s month-long George A. Romero tribute, Pittsburgh City Paper presents 31 Days of the Undead, a series of reviews and essays about zombie media. Look for new posts going up every day from now through Oct. 31. 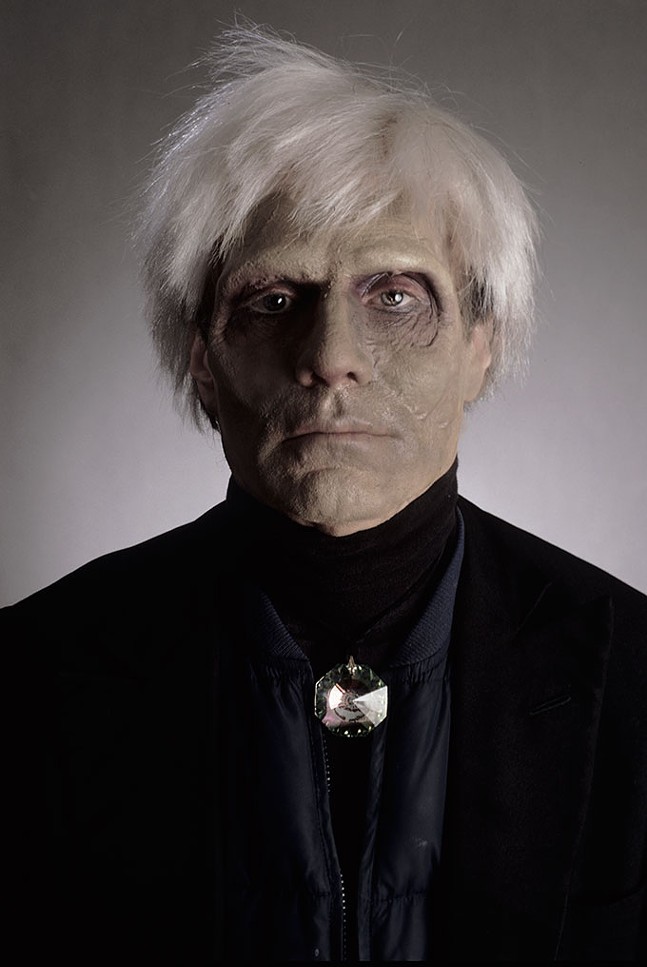 When people think of Pittsburgh, two things often come to mind: Andy Warhol, born and raised in the Steel City before leaving for New York City after graduating from the Carnegie Institute of Technology (now Carnegie Mellon University); and zombies, because of the Night of the Living Dead movies, filmed just outside of the city and adopted by Pittsburghers as their own.

It only made sense, then, to continue our 31 Days of the Undead coverage of zombie media by searching Twitter for “zombie Andy Warhol,” in hopes of finding some Warhol-themed Halloween costumes to include in one of our posts. The costumes have popped up occasionally online throughout the years, and I thought a round-up of photos would be a lot of fun. Instead, the search led to something even better, one of the most iconic Pittsburgh images I had never before seen: Andy Warhol in zombie makeup posed side-by-side with another of Pittsburgh’s own, world-renowned special effects make-up artist Tom Savini.

Savini’s connection to zombies made sense, of course. The artist and actor is known for his special effects horror makeup and claims he owes his fame to director George Romero offering him a gig on Dawn of the Dead, the second in the Living Dead series.

“I wouldn’t have a career if not for this movie,” Savini told CP in 2018. “If there was no Dawn, there would be no Friday the 13th for me. That’s why I was contacted for Friday the 13th. There’s groundbreaking effects — it wasn’t necessarily realistic before Dawn.”

But it was after the third Living Dead film when Savini was contacted for the photograph in question, bringing Pittsburgh’s most famous artist into his world.

“I remember that I got a phone call after we did Day of the Dead, ‘Would I like to make up Andy Warhol as a zombie?’” Savini wrote CP over email. “Greg Nicotero and I went to New York and did his makeup and it appeared in Chris Makos‘ book on Andy Warhol.” (Nicotero, best known today as executive producer of zombie TV show The Walking Dead, worked as a makeup artist under Savini on Day of the Dead.)

Savini had never met Warhol before that day, though notes that his brother went to college with the artist. “He was very quiet and sat patiently for the makeup until I went to move his hair out of the way,” he says. “He gently stopped my hand, and I could see it was a hairpiece taped on.” 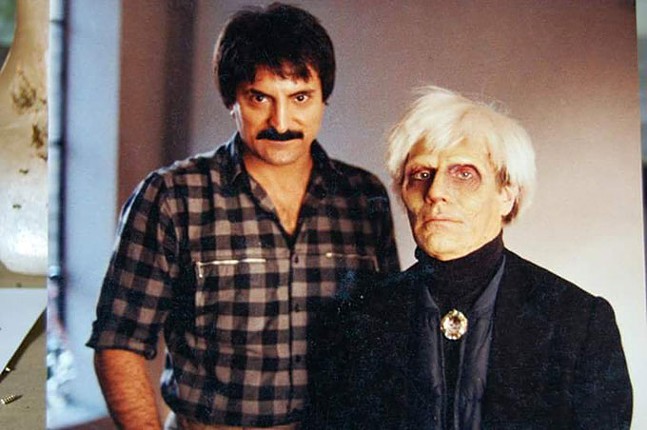 Makos, the photographer, was a longtime friend of Warhol and recalls the artist liked the idea of zombies in general. The Living Dead movies, he tells CP by phone from New York, were “so much in Andy’s fieldhouse, making movies with very little budget but still getting the point across.” The photograph appears in one of multiple books Makos has published in homage to his friend.

Only one other person, according to Makos, owns a copy of the photograph of Zombie Warhol: Norman Reedus, the actor who plays the lead character Daryl Dixon on The Walking Dead. The actor first saw the photograph during a portrait session in Makos’ studio, as he was admiring the photographer’s collection of prints.

“The Andy Warhol zombie photograph I HAD to have for obvious reasons,” Reedus tells CP over email. “I just loved it. I called Greg Nicotero to tell him about it immediately, his answer was, ‘Oh yeah. I was there with Tom helping with the makeup on Andy.’ It’s one of my favorite photos of all time.”

“It makes complete sense,” says Makos. “He’s a zombie killer, so for him to have a picture of Andy as a zombie, it makes perfect sense.”

Makos offered to send a copy of that final portrait of Warhol in zombie makeup to CP, but only under the condition that we run it as big as possible. “I’m trying to make my picture famous,” he laughs, audibly excited that the photograph has so many connections to Pittsburgh, where it’ll be printed.

But wait … didn’t Warhol hate his hometown, like we’re so often told?

“His adult life really began when he moved to New York City,” Makos says. “So it’s not that he didn’t like Pittsburgh, it’s that New York City is where he found himself.”

As to the original online photo search which led to this discovery, I ask Makos what he thinks Warhol would think about people dressing up as him as Zombie Andy Warhol for Halloween.